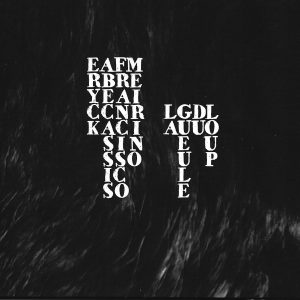 Here we have the return, after what seems to be some absence, of Francisco Meirino, one of
those noise musicians whose work I quite enjoy these days. Work by French bass and modular
synth player Eryck Abecassis was reviewed throughout the years, mainly when performed by him
and composed by Kasper T. Toeplitz, but in Vital Weekly 1002 we also had a solo CD of his
modular synth playing. Meirino has the same instrument here, and of course I know no two
modular systems are alike. They met up at the GRM studios in Paris, in November 2015, and
recorded a whole bunch of stuff together, which they mixed at home, resulting in the seven
pieces that can be found on this CD. Something I noted before: the modular synthesizer is like
the new laptop. Not in size, far from it, but the fact that everybody seems to be using these
these days. A duet between two people them is hardly something you never seen before. I enjoy
the way they have a somewhat noisier approach to the modular synthesizer, with some nasty and
gritty modular working overtime, leaving out the soft bits and pieces. Many of their peers would go
out for something that is more ambient perhaps, flowing and/or a downright Tangerine Dream rip-
off but these two gentlemen go deep for the more extreme possibilities without planning things to
be an all-out noise excursion. I think I wouldn’t have liked it any other way; intelligent noise is what
we want I guess and that is something we surely get with this release. These are fifty minutes of
sonic overload, but nothing mindless; everything that needs to be in here is there and everything
else is left out.(FdW)